Did you know that a Traditional Publisher doesn’t own an author’s work forever. Yippee!

I have managed to get the rights back to the first two books I had published, Invitation To Ruin and Invitation To Scandal. I’ve re-titled them back to the titles I selected for these stories. Lord of Wicked and Lord of Danger.

Invitation to Ruin was my debut book and it was a finalist in the RT Book Review Best First Historical. AND it WON the RomCom Readers Crown Best Historical in 2012. I loved that book.

My publisher priced these books quite high $9.99 for an eBook so I’m pleased to be able to offer these books to my readers for a more reasonable price of $3.99

Lord of Wicked : A Regency Marriage Of Convenience Romance (was Invitation to Ruin) 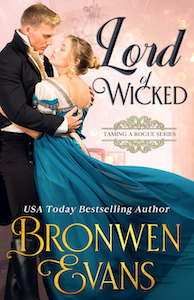 Book #1 in the Taming A Rogue Series

One Good Lady Is About to Go Bad…

The only thing Miss Melissa Goodly has ever wanted out of a marriage is love. But any hope of that dissolves one wild night, when she loses herself in the arms of the most irresistible–and unobtainable–man in all of England. For when they are discovered in a position as compromising as it is pleasurable, she has no choice but to accept his proposal.

Avowed bachelor Antony Craven, Earl of Wickham, never meant to seduce an innocent like Melissa. Yet now that the damage is done, it does seem like she’d make a very convenient wife. After all, she is so naive he won’t have to worry about ever being tempted. Or so he thinks, until the vows are spoken and they are left alone–and his new bride reveals a streak just as brazen and unrestrained as his own…

Lord of Danger : A Regency Enemies To Lovers Romance (was Invitation To Scandal) 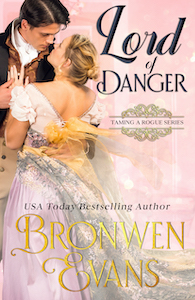 Book #2 in the Taming A Rogue series

Catch me if you can…

Plagued by scandalous rumors, Rheda Kerrich will stop at nothing to restore her reputation and make an honest living for herself–and she’s determined to do it without a husband. But times are hard, and smuggling is a risky though profitable trade. So when a dashing agent for the English government catches her in the act, she desperately resists his charms and conceals her illicit profession. Until she realizes he may be the key to her ultimate freedom–and unbridled passion…

Rufus Knight, Viscount Strathmore, has never had trouble beguiling the ladies of Kent. When his search for “Dark Shadow,” a cunningly elusive smuggler, leads him to alluring and headstrong Rhe, her objections to his amorous advances merely incite a tantalizing game of cat and mouse. Soon, they’ll find the very secrets driving them apart could ensnare them in a love they can’t escape…

There are two more books in the series. Lord of Passion and Lord of Pleasure. You can see the whole series here.

I hope you check these two books out if you have never read them. Let me know what you think.