The Drive Me Wild series is proving to be very popular. Set in Bad Boy Autos, think Fast and Furious but nothing illegal, The team at bad boys all need a little loving.

Book #1 in the series is RECKLESS CURVES

Reckless Curves is on SALE for a limited time at 99c! So don’t miss out…. 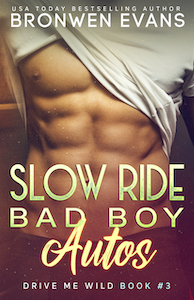 and I also have Sully’s story FAST TRACK TO LOVE in the boxed set Baby It’s Hot Outside, releasing 25th October.

Bronwen Evans is a USA Today Bestselling Author who lives in New Zealand with her Cavoodles Brandy and Duke. She’s set this Christmas romance in her home town of Havelock North, a hero for her heroine, but he’s a visitor from the USA… Bron hopes a hero like Sully comes calling soon…