SALE $0.99 To Challenge the Earl of Cravenswood

SALE $0.99US for a limited time
TO CHALLENGE THE EARL OF CRAVENSWOOD 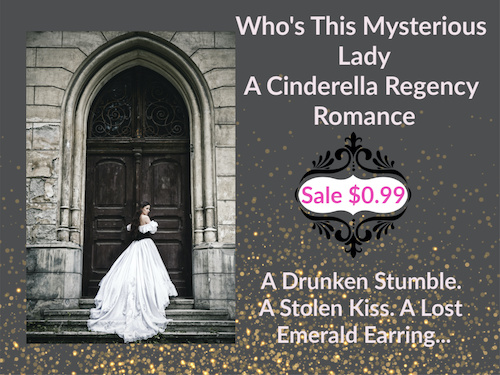 Amy was moving right and left, searching for something. This was his mystery woman. He was sure of it.

Henry caught a flash of pale skin, raven-black hair, and the scent of citrus. He closed his eyes and breathed deep. Blast. He couldn’t swear it was the same scent as last night. He wished his head didn’t hurt so much, and that he’d not been so drunk. He opened his eyes and cleared his throat.
At the sound, her head rose sharply and smacked the underside of the bench. “Owe!”

The deliciously plump bottom began wiggling as she backed out from under the seat, and Henry’s body reacted immediately. Heat licked at his groin and blood raced south.

She muttered under her breath, twisting to look over her shoulder. Her appalled gaze reached Henry and she froze, eyes widening with shock.

Henry’s shock matched hers, but he hid it under what he hoped was a friendly yet non-threatening manner, in the sense of I’m not about to attack you again kind of way. It was Amy. His neighbor. Please, dear God, don’t let me have molested Amy.

“Have you lost something, Lady Amy?”

Warm honey coloured eyes quickly masked her shock and she seemed fixated on his bandage. “Oh, you’ve hurt yourself.” She gave a little giggle. “Who on earth dressed your wound? It looks as if a child has played doctor with your head.”

“Quite. Thank you for your concern. I had a small accident.”

He watched to see if guilty recognition entered her face, but it remained blank, except for amusement. Irritation stirred. He became more direct.

Amy looked around anxiously. “You were attacked in your own garden?” She took a step back.

He blanched. Perhaps it wasn’t Amy. He hadn’t meant to frighten her. “Good lord, no. I tripped and fell.”

Of course it couldn’t have been Amy. Surely Amy would have stopped him immediately. A young woman of quality, an innocent young woman would never have allowed such behavior. Her screams would have brought her servants running. Besides, he’d never been attracted to Amy Shipton.