I have a new release coming 14 June – ADDICTED TO THE DUKE (available for pre-order).

It’s book #1 in my new Imperfect Lords series. The hero in Addicted To The Duke struggles with opium addiction.

It’s a topic you don’t often read about in Regency Historical Romances…. opium addiction, yet it was common.

Here is a 5 star review from Goodreads that tells a little more about the story:

Alex and Hestia, another wonderful couple who found their happy ever after with this author’s storytelling. There was a topic in this story that you don’t often read about in Regency romances, that of addiction to opium (aka laudanum). The topic was addressed by the author with directness and dispatch right from the beginning of the story, and I admired that about the storytelling. Alex’s addiction stemmed from his capture and captivity by a piratical Turk which later made for a very rocky romance between Alex and Hestia…and a very interesting journey and adventure. Once started I just could not put it down.

Back in the early 1800’s no one, not even doctors or surgeons, understood how addictive opium was. In 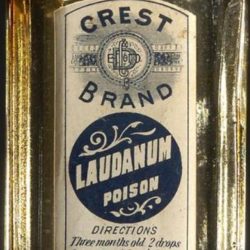 fact, the word ‘addict’ in terms of narcotics did not come into use until 1907.

So, Alex our hero in ADDICTED TO THE DUKE, kept using opium because he did not understand addiction, in that he had no idea what an addict was.

Alex was captured and held as a slave in eighteen hundred and seven and became an opium addict. On his rescue two years later, his doctor prescribes the use laudanum to help him escape his nightmares and help him sleep. He therefore thinks it’s fine to use. The laudanum does ease his nightmares. In early Regency no one understood that laudanum was just as addictive as opium, in fact most physicians saw opium and it’s derivative morphine as the ‘saviour of medicine’. Little did they no…

Many women who were given laudanum for headaches and menstrual cramps, and children given it for teething and stomach upsets and other ailments, soon became very ill from opium addiction.

Opium could be bought over the counter like a tonic until 1864 when it became pharmacy only and could only be sold in pharmacies. It was not restricted as a medicine until 1901.

My story is set during the Regency period where opium addiction was not understood and many did not understand that there was no difference between opium smoking and taking laudanum. Both were highly addictive.

English artists, writers, and other luminaries were famously experimenting with and becoming addicted to opium in the early 19th century. By 1830, British use of opium for both medicinal and recreational purposes was at an all time high. 22,000 pounds of opium were imported from Turkey and India that year.

Laudanum continued to be popular, and was actually cheaper than beer or wine. Patent medicines (non-prescription “cures” of all descriptions,) and opium preparations such as Dover’s Powder were readily available. The incidence of opium dependence grew steadily in England, Europe, and the United States during the first half of the 19th century by means of these treatments. Working-class medicinal use of products containing opium as sedatives for children was especially common in England. Those using opium for recreational purposes seem to have been primarily English literary and creative personalities, such as Thomas de Quincey, Byron, Shelley, Barrett-Browning, Coleridge, and Dickens.

“Oh! just, subtle, and mighty opium! that to the hearts of poor and rich alike, for the wounds that will never heal, and for ‘the pangs that tempt the spirit to rebel,’ bringest an assuaging balm; eloquent opium! that with thy potent rhetoric stealest away the purposes of wrath; and to the guilty man, for one night givest back the hopes of his youth, and hands washed pure of blood….”

Confessions of an Opium Eater – (1821) is an autobiographical account written by Thomas De Quincey, about his laudanum addiction and its effect on his life.

I thought this poem beautifully sums up Alex’s problem…wounds that will never heal….it take Hestia’s love to heal, it’s stronger than any drug. 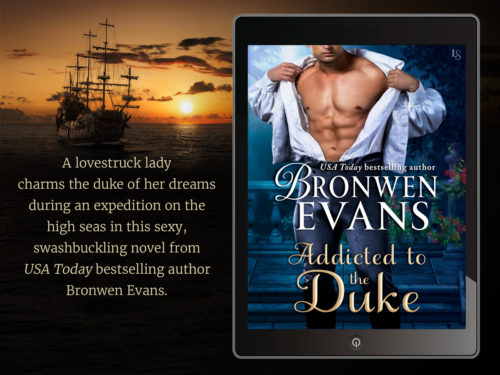 A lovestruck lady charms the duke of her dreams during an expedition on the high seas in this sexy, swashbuckling novel from USA Today bestselling author Bronwen Evans.

Alexander Sylvester Bracken, Duke of Bedford, has a mission: sail to the Mediterranean and track down Lady Hestia Cary’s missing father. It is a straightforward task, but for two rather vexing complications. First, the sea holds painful memories; second, for her own safety, Hestia is to accompany him. As Alex battles the demons of his past, he must also resist Hestia’s surprisingly skillful attempts at seduction. After all, Alex has sworn to leave her untouched, and he intends to honor that vow—until he can properly ask the Earl’s blessing.

Ever since His Grace rescued Hestia from the arms of a Turkish pirate six long years ago, her heart has belonged to Alex. So when he agrees to help find her father, Hestia is thrilled. Although Alex tries to hide it, there’s passion in his eyes—and a frisson of desire in the air—whenever they meet. On board ship, miles from home, Alex won’t be able to deny her any longer. But with scoundrels lying in wait, she may not live to tell the tale of her conquest.