16th August is release day for A TASTE OF SEDUCTION book #5 in my Disgraced Lords series.

I’m so happy to be in the great company of some amazing  authors who all have new books coming out in August. Rachel Lacey, Jessica Linden, and Lisa Marie Perry are all beginning new series, while Jen Doyle Ink, Codi Gary, Annie Rains and myself have new installments in currently running series.

And in honor of this release blitz, we’re giving away a $50 gift certificate to the e-retailer of your choice. All you need to do is enter below

The flames of desire fuel a torrid reunion…

A Taste of Seduction

Lady Evangeline Stuart chose to wed a tyrant with a title, or so society believes. That was five years ago—five long years she could have spent with her first and only love: Lord Hadley Fullerton, the second son of the Duke of Claymore. Now Evangeline is a widow, and her soul cries out for Hadley. But when they see each other at last, everything has changed. The passion in his eyes has been corrupted by betrayal. Somehow Evangeline must regain Hadley’s trust—without revealing the secret that would spoil the seduction.

Hadley is determined not to be distracted by Evangeline. He and the other Libertine Scholars are in pursuit of an enemy who has been striking at them from the shadows, and Evangeline’s mere presence could be dangerous. But with one smile, one touch, one taste of Evangeline’s lips, Hadley’s resolve is overpowered by much more pleasant memories. As the two enter into a discreet affair, Hadley vows to give her his body, never his heart. That she will have to earn. 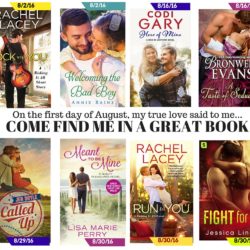 August 2:
Rock With You, by Rachel Lacey
Amazon | B&N | More info and links…

August 16:
Hero of Mine, by Codi Gary
Amazon

Meant to be Mine, by Lisa Marie Perry
Amazon | B&N | iBooks | Kobo

I can’t wait especially for the Regencies

What a great series! Can’t wait!