If you’ve been on my personal facebook page you’ll see it’s a bit of a turbulent time for me and my family. 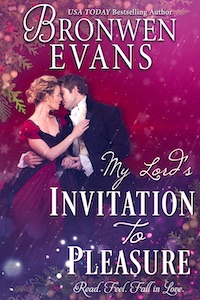 So, just a quick note to say, Invitation To Pleasure – book 3.5 in my Invitation To series releases today. It’s a Christmas Novella that was in the Winter Wishes Boxed Set, so you may already have read it if you bought that boxed set.

How do you make a lady who does not trust men, open her heart to love?

They reached the entrance to the large stable block and Daniel’s body hummed when he saw the mistletoe hanging above the large barn door. He slowed his step and pulled her to face him, pointing upwards as he did.

“Don’t be ridiculous. I will not kiss you; I hardly know you. Besides because of you, my plan is ruined.”

“I can’t help the fact your plan was a terrible one. For all you knew, Rufus might have wanted to show Apollo off to his visitors. The estate is large. Did you really think you’d be able to slink in and out unaided?” He pulled her closer. “As to a kiss, a chaste peck is often the norm, but a more passionate kiss would be appropriate considering I saved you from facing Michael’s wrath.”

She raised a face filled with alarm but also desire. He could read it easily in her expressive eyes. “Now then,” he said smiling, “a kiss is a thing to be shared, not given nor rushed.” Tipping her chin up, he gazed into those wide, luminous eyes and more than simple desire began to unfold—possessiveness—a sensation foreign to him where a woman was concerned. He felt, for a moment, as if he was gazing into the eyes of an angel, and he touched her smooth cheek with reverence.

“Have you any idea,” he murmured softly, “how enchanting you are? Tell me your name.”

The way he spoke those words, combined with his touch and the kindness he’d done her this evening, had the seductive impact Georgiana had dreaded from the moment she’d looked into his handsome face.

When he’d lain atop her, all hard muscle and withheld strength, she felt as if she were beginning to melt and float inside. As his head bent and his lips drew near, she couldn’t pull her gaze from his hypnotic green eyes. And worse still, she didn’t want to try.

“Georgiana,” she answered breathlessly as his lips drew closer.

When his lips took hers in a kiss, she knew that it would be nothing at all like the chaste kisses she’d experienced hidden behind the potted plants at countless balls. Having reached twenty-years-of-age, she’d experienced her fair share of innocent kisses. His mouth slanted over hers with fierce tenderness, while his hand curved round her nape, his fingers stroking her sensitive skin along the collar of her shirt, and his other arm encircled her waist, pulling her tightly against his hard, hot body.

Lost in a sea of pure sensation, Georgiana slid her hands up his muscular chest to wrap her arms around his neck, clinging to him as if her world depended on her staying as close to him as she could. Desire unfurled deep within her at the feel of his erection and she clung tighter to him, sliding her hands down his back to his firm buttocks.

He kissed her long and lingeringly, both gentle and persuasive. So, when he touched his tongue to her trembling lips, this time coaxing them to part, insisting actually, she eagerly admitted him. His tongue slid between her open lips, filling her mouth. His hand shifted from her waist, sliding upward toward her breasts.

She barely noted the moan of encouragement that escaped her above the pounding of her heart. Never had she let a man take such liberties, and never had she wanted to let him. She hoped the kiss would never end.

Just as she silently made her wish, Daniel’s hands left her body, and he fell sideways, out cold on the cobblestones.

“You were right, Baron. She didn’t come alone, however, I didn’t expect to have to save her from a kiss. A kiss she looked as if she was enjoying.”

Georgiana chose to ignore Billy’s chastisement. She peered down at Daniel’s prone form. “He will be all right, won’t he?”

“Aye, he’ll have a sore head when he wakes so best we take our leave before he rouses. No chance of getting the colt then?”

She bent down and reached out to touch Daniel’s face. He looked so young and less sure of himself as he lay on the ground, knocked out cold. She hoped he wouldn’t hate her. He was the first man she’d ever felt an ounce of grudging respect for.

“No, the groom took him,” she answered sadly. “We will have to find another way to retrieve the colt. He knows who I am and why I’m here.”