There is only 10 days to go until my Scottish Regency Novella, Highland Wishes And Dreams releases on 24 September.

It’s a fabulous novella that deals with life, love, and loss.

Can best friends push past their sorrow to find love in this Scottish Regency historical romance? Can the romantic, magical highland glen grant their wishes? And will Lady Galina win her highlander’s heart? 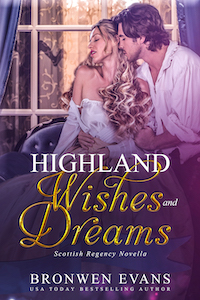 This morning Galina had ridden out alone to her secret glen. It was rumored that if you wished hard enough, a Fae appeared and granted your wish. If she’d had time she’d have ridden here and begged for Wen’s life, but she’d died before Galina could saddle the horse. Galina knew no one, not even the Fae, could bring Wen back from the dead.

As she walked through the glen leading her horse, Legion, she stopped to pick a wild flower. She knew what she wanted to wish for but that would be selfish at this time. She wanted Finn to love her—not as a friend, but as a lover. She wanted a love like Wen and Andrew shared—even if it was for only a short time.

She was about to lead Legion over to the fallen tree to remount when, as if the Fae had been listening to her thoughts, Finn came galloping into the glen. Why did just one look at him set her body afire? Her heart surged deep within her chest and she had to hold back her wish. He pulled his stallion to a halt with ease.

“Galina. I hope I have not intruded on your peace.”

“Not at all. I was just about to remount.”

Finn looked around the small glen. “It’s a beautiful place. The stream behind the copse sounds almost magical.”

“The legend is that the Fae favor this glen and grant wishes to those who they deem deserving.”

Finn’s laugh irked her a bit but she was not surprised. Andrew had laughed when she’d brought him here many years ago.

“You’re a bit old to believe in the Fae.”

She ignored Finn and mounted Legion, determined to enjoy the ride home. She had much to do this afternoon. The christening to organize, and Jake’s christening gown to complete. Wen had embroidered the gown herself and Galina needed to ensure it was ready for tomorrow.

Finn walked his horse to stand next to her. “Not in the mood for teasing I see.”

She shook her head.

“No. I suspect it’s not been an easy two months. You could have written to me. I would have come sooner.”

“You were dealing with your own grief and I knew the christening was coming. I had hoped to get through to Andrew by then, but I could not.” She had not known how to help her brother.

Finn’s eyes filled with sorrow. She nodded. “I’m just thankful that he is taking an interest in Jake.”

“Aye. That is a very good sign.” Finn sat silently obviously deep in thought. “There is one thing that I may need your help with.”

She looked up. “Anything.”

Galina knew all about Wen’s stunning emerald ring. The pair had talked about it many a night by the fire. Wen thought it held special powers, and in return Galina brought Wen to this glen and told her about the Fae. It was their secret. Wen told her she had wished on the ring that Galina would marry Finn so that they would be sisters. That had not come true and now Wen was gone.

“I’m sure Andrew has the ring safe.”

Finn’s lips thinned. “Before I came here, I had written to Andrew requesting the return of the ring as per the marriage contract, and Andrew said no.”

“This is between you and Andrew.”

Finn’s blue eyes searched her face. “I would like you to be there when I ask for it once again. I’m hoping that will help.” Then he rubbed a hand over his face. “Is there a reason why Andrew would want to hold on to it? Something I don’t realize. It might help me broach the subject if I knew why he refused.”

Galina swallowed back a reply. She knew why. Wen had given the ring to Andrew before they wed. She told him it was her keepsake for their daughter, and that as long as he had it, she would stay in his heart forever. He wore it on a chain around his neck. I don’t think either of them realized how short a life together they would have. She knew deep in her bones Andrew would never part with it.

And if Finn could not understand, this would tear their families apart. She would never see Finn again.

Learn more on my book page…

Tell me what gem stone is in Wen’s ring and enter the draw to win a $10 Gift Card!