It’s my pleasure to welcome one of my Love Historicals fellow bloggers, USA Today Bestselling Author, Gina Danna to my blog. Gina is here today to show off her new book, Love and Vengeance! A romance set in ancient Rome.

Let’s start with the important bit, what is her book about?

Rome 108 A.D., under the Emperor Trajan, is the center of the civilized world. It is a time of 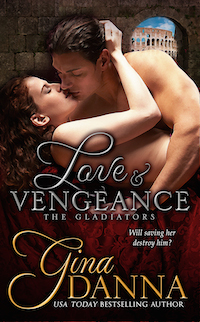 sophistication and decadence, a brutal world to their conquered.

Marcus, a Roman citizen sentenced to die as a gladiator, accused by his wife and brother for a crime he did not commit. Yet death eludes him and he rises to become champion of the sands. The title he does not want. He seeks revenge but his victories in the Colosseum bestow monetary rewards he can use to save a beautiful slave, Gustina, from certain death by the beasts. She gives him a taste of love in a world full of lies, betrayal and murder.

But his overwhelming desire for vengeance, for blood and the kill, brings a higher price tag – can he satisfy the demon inside him and face the truth? A truth that will kill the woman he loves?

Welcome, Gina. I believe you have a question for the readers?

If you could travel back in time, where would you go?

One lucky commenter will win a copy of the book!

A fellow writer had written a time travel piece I read about going back to the time of knights. It was good and I commented how I’d travel back to Ancient Rome but feared I’d enter the Colosseum where I would be killed like the Christians. She retorted, but what if a man saved me? That immediately set my muse to playing. What if…

Instantly, Marcus and Gustina came to life. The opening of Love & Vengeance is that rescue. These two demanded I tell their story, which got me researching just how people lived back then? What was the Colosseum like? Gladiators? Research isn’t new to me – I have a graduate degree in History though I admit my favorite time period is the American Civil War. But Ancient Rome held a certain appeal I couldn’t deny.

The Roman Empire thrived for hundreds of years, first as a Republic then as an Empire. It expanded throughout Europe, the Middle East and northern Africa. But the pinnacle of the entire civilization was Rome itself. To the Romans, everyone wanted to be one of them. The town itself grew to over a million inhabitants by 100 A.D. (or C. E.). There many of today’s foundations took hold – the idea of a representative assembly, The Senate; philosophy (they took the Greeks beginnings and expanded them, adopting them as their own); architecture; sewer systems that survive to today; aqueducts and baths survived; roads.

And war. The bulk of their Empire was amassed through war. Those defeated in war often were turned into slaves – a commodity the Romans needed badly. Those infamous structures like the Colosseum were built through slave labor. Anyone could become a slave then, even miscreant Romans, conflicted of crimes, would become a slave. Slavery was extremely bad then, used as expendable lives. Even gladiators for the most part were slaves though a few freemen fought in the games to earn coin enough to get out of debt, selling themselves to the gladiatorial schools for a couple of years to do so though the price tag could mean they died in the games instead of leaving a free man. Gladiators, though, were the ‘rock stars’ of the period. Successful champions had a following of fans, mostly women. Roads to the arena often were lined on game day with vendors selling items for purchase on those favored, like pictures, trinkets used by them, vials of their blood (blood of a champion was thought to cure ills like infertility, epilepsy, etc.) and other goods.

It is a fascinating time, full of intrigue and mystery. Come and get a taste of long ago, in Ancient Rome with Marcus and Gustina in Love & Vengeance!

Born in St. Louis, Missouri, Gina Danna has spent the better part of her life reading. History has been her love and she spent numerous hours devouring historical romance stories, dreaming of writing one of her own. Years later, after receiving undergraduate and graduate degrees in History, writing academic research papers and writing for museum programs and events, she finally found the time to write her own stories of historical romantic fiction.
Now, under the supervision of her three dogs and three cats, she writes amid a library of research books, with her only true break away is to spend time with her other life long dream – her Arabian horse – with him, her muse can play.
0 0 votes
Article Rating

This book looks great. I am interested in reading books set in different time periods, how refreshing to see a new book not set in the Regency time period!