A boxed set of ten scorching hot historical romances featuring dukes, rogues, and alpha heroes and the women who can’t resist them. Fall in love with tales of intrigue, suspense, wit, and passion.

For a limited time (July 27-Sept. 21), you can purchase TEMPTED BY HIS TOUCH for just 99 CENTS. That’s a savings of almost $35! That’s at least a week’s worth of coffee! Or a really nice bottle of wine!

We’re so excited to reveal the cover of TEMPTED BY HIS TOUCH here at INSERT BLOG NAME HERE! Without further fuss . . . ta da!! 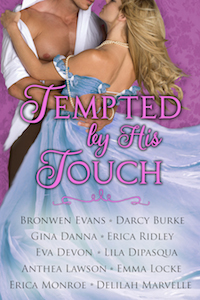 And now to tempt you with the books included in Tempted by His Touch . . .

Sonata for a Scoundrel
By Anthea Lawson, RITA-nominated author

Clara Becker is a supremely gifted composer—a talent of little to no use to a woman in 1830s Europe. Her compositions are only worth something when published under her brother’s name, yet this deception barely enables them to scrape out a living in the poorest quarter of London. When Darien Reynard, the most celebrated musician in Europe, comes across Becker’s compositions, he knows this music will secure his place in history. Darien invites the composer to tour with him, but must agree to a most unusual demand—that he bring along his sister . . .

Scoundrel Ever After
By Darcy Burke

When wallflower Audrey Cheswick runs away with England’s most wanted criminal, she learns adventure comes with a price—not just her reputation or her virtue, but her heart. If Ethan Jagger can escape the hangman’s noose and start anew, will she consent to love a scoundrel ever after?

Once Upon a Duke
By Eva Devon

Everything is going swimmingly for Kathryn Darrell. She’s got an annuity of a hundred thousand a year, her lecherous-heart breaking husband has had the good graces to pop off, and best of all, she has her freedom—something she has every intention of reveling in to the fullest. And who better to revel with than Ryder Blake, the infamous Duke of Darkwell?

Violet Whitechapel committed an unspeakable crime to save a child. To escape the hangman’s noose, she takes refuge in a crumbling abbey with secrets darker than her own. But when those secrets begin to unravel, none of the abbey’s residents will be able to remain hidden . . .

One sinfully seductive hero on a dangerous mission. One mysterious beauty intent on guarding her secrets. One steamy, emotionally charged historical romance from the acclaimed Fiery Tales Series…Inspired by Rapunzel…Rescuing this beauty from the ‘tower’ is only the beginning…

To Dare the Duke of Dangerfield
By Bronwen Evans, USA Today Bestselling Author

Harlow Telford, the Duke of Dangerfield, is amused by his hellion neighbor, Lady Caitlin Southall. When she bursts into one of his private gatherings, he mistakes her for the entertainment. Her slap across his face sets him straight and raises the absurd desire to seduce the unconventional beauty into his bed. When she issues her daft challenge to win back her father’s pile of rubble, the terms are set. And he’ll do anything to win–except fall in love…

The Problem with Seduction
By Emma Locke

Elizabeth Spencer needs a man, one who won’t be too picky about his reputation. Lord Constantine Alexander can’t afford another trip to debtors’ prison, which makes him the perfect candidate. She doesn’t expect him to have a heart of gold, nor does she expect to find him irresistible—because while she needs a man, she doesn’t particularly want one.

A Dangerous Invitation
By Erica Monroe

Struggling to survive in London’s dangerous rookeries, Kate Morgan is determined not to give into the temptation of past love Daniel O’Reilly when he returns to win back her heart and prove he’s innocent of murder.

Tristan, the Marquis of Wrenworth and British spy, must marry but he’s haunted by guilt of war. Lady Evelyn Hurstine’s past makes her fear men but for Tristan, she’s willing to overcome her fear. Caught in a world of intrigue and mayhem, can they find love before the traitor destroys them both?

Lady Caroline Arabella Starling has been in love with her older brother’s best friend, Caldwell, since she was thirteen. Unfortunately, too many things keep getting in the way of proving her love. Her four younger sisters, her mother, her brother, all of society and the man she loves himself. But where there is a will, there is a way, and Caroline is about to redefine not only respectability but true love.

Because TEMPTED BY HIS TOUCH features dukes, rogues, and alpha heroes, which do you prefer? Or is your ideal guy not on that list? Tell us in the comments!

Be sure to join us July 27-August 2 for a release extravaganza! Details will be posted on our Facebook page, where we’re hosting a party with fabulous teasers, giveaways, and most of all: FUN – Wednesday, July 30, 6-11 pm Eastern.