In the digital world of publishing, being an author is not about simply writing the book. We also have to be savvy business people too. We have to understand pricing, positioning, promotion, and branding. 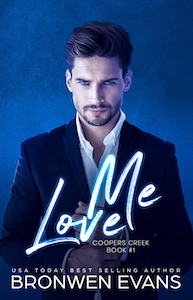 nford’s trip to New York, and her plan to bring her orphaned goddaughter home to Coopers Creek, backfires. Hayley’s coming home but to Emily’s horror she’s hired as Hayley’s nanny and moving in with her ex-lover, Hayley’s uncle, the handsome cowboy come banker, Tyler Jeffries. He still makes her heart pound-even though four years ago he walked away from their relationship without a backward glance.

Tyler hates that he has no choice but to let Emily move in, but this is about Hayley and what she needs. He can’t believe the woman he blames for his sister’s death still fiercely fires his blood. Back in Coopers Creek, out of his comfort zone, coping with PTA meetings and white picket fences, he lets his heart’s defenses down, only to have Emily betray him again…

Heal Me – Coopers Creek book #2 deals with taking the leap when you’ve lost someone you loved.

After her fiance dies, Kate Donoghue has picked up the broken pieces of her heart and moved on. 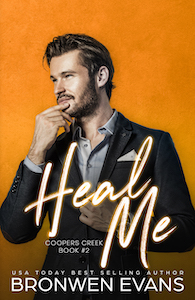 She’s sworn off men and is building a new life in Coopers Creek, Colorado as the local vet and senior member of the mountain rescue team. So why now is she suddenly distracted by the seriously sexy investment banker come cowboy, Ric Stanford? The man screams big city playboy but what can it hurt to indulge? Kate swears she won’t fall for Ric… but the heat between them is scorching.

Investment Banker Ric Stanford is enjoying his new life in the New York office. He’s finally putting distance between his hometown memories of Lizzie and her reckless death. So he’s more than pissed when on a trip home to Coopers Creek he breaks his leg and is stuck there for the foreseeable future. That is, until sexy vet, Kate Donoghue, arrives to attend to his sister’s dog and suddenly a month in Coopers Creek looks totally irresistible.

Coopers Creek holds painful memories for Ric and Kate. Can they heal from their pasts; can the town hold a beautiful new future for them both? 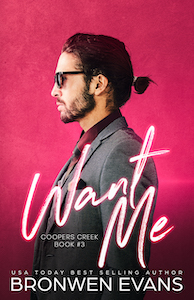 Want Me – Coopers Creek book #3 deals with trust and having faith in the one you love.

Marketing genius and proud tree-hugger, Chase McIntyre lives for fun, but he’s dead serious about protecting his heart. Left sterile by a childhood disease, Chase knows that he’ll never have what he wants most—a family. He learned the hard way that shooting blanks is a deal-breaker for most women. He’ll never risk love again—that is until beautiful, wounded Anna enters his life. Chase begins earning Anna’s trust and falling for her—until she destroys him with three little words…

Need Me – Coopers Creek book #4 deals with loss and starting your life again.

Brooke Carpenter loves her life in small town Coopers Creek, but with her friends Kate, Emily, and 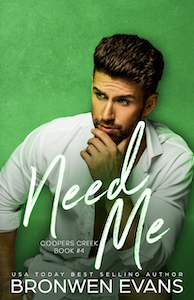 Anna, all having babies her biological clock is ticking in double-time. After being burned by her lying, cheating fiancé, she’s wary of men and their fake promises. But Kate’s hunky best friend, Robert Chambers, is nothing like her ex. His shy, good-guy personality is just what the doctor—or nurse—ordered. Pushing her insecurities and her mother’s warning aside about ‘too good to be true usually is’, she sets out to snag the heroic mountain climber.

Coopers Creek mountain rescue team member, Robert Chambers loves lending a helping hand to others—often literally. While he wants to contribute to society, a devastating mistake in his past is behind his driving need to save lives. After his latest rescue effort, sexy, fiery nurse Brooke captures his attention and mild-mannered Robert can’t resist her charms. He falls hard and fast, unable to fight his growing attraction even though his tortured past makes it impossible to give her the one thing Brooke really wants…

I hope you like the new branding and feel free to give me any feedback.