A Taste of Seduction 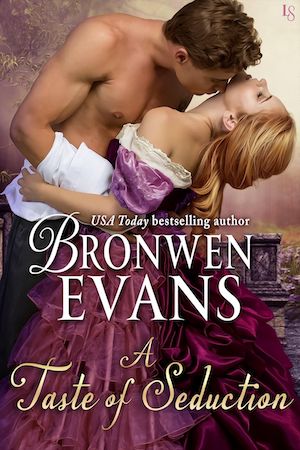 The flames of desire fuel a torrid reunion as bestselling author Bronwen Evans returns with another captivating novel of the Disgraced Lords. See why Jen McLaughlin raves, “Bronwen’s historical romances always make the top of my reading list!”

Lady Evangeline Stuart chose to wed a tyrant with a title, or so society believes. That was five years ago—five long years she could have spent with her first and only love: Lord Hadley Fullerton, the second son of the Duke of Claymore. Now Evangeline is a widow, and her soul cries out for Hadley. But when they see each other at last, everything has changed. The passion in his eyes has been corrupted by betrayal. Somehow Evangeline must regain Hadley’s trust—without revealing the secret that would spoil the seduction.

Hadley is determined not to be distracted by Evangeline. He and the other Libertine Scholars are in pursuit of an enemy who has been striking at them from the shadows, and Evangeline’s mere presence could be dangerous. But with one smile, one touch, one taste of Evangeline’s lips, Hadley’s resolve is overpowered by much more pleasant memories. As the two enter into a discreet affair, Hadley vows to give her his body, never his heart. That she will have to earn.

» Excerpt: A Taste of Seduction

“This tale is poignant, heartwarming and readers may be reaching for the Kleenex once or twice before the breathtaking ending.”

“Bronwen Evans spins a sexy romp in A Touch of Passion, as a lord who doesn’t dare love is locked in passionate battle with a woman who will accept nothing less. And may the best woman win!”

“With complexity, depth, and hot, hot passion, Whisper of Desire kept my emotions on a roller coaster—and I didn’t want to get off.”

“A TASTE OF SEDUCTION is a grand love story, tremendously exciting, and the wonderful, fabulous ending promises for the next book to be at least as brilliant!”

“Evans presents another exciting entry in her action-filled, romantic Disgraced Lords series with Hadley and Evangeline’s story. Picking up where she left off in the last book, she tackles issues seldom addressed in Regency times that are turning points in the story. Evans paints evil with a fine brush, so it’s sometimes difficult to sort out the bad guys. Be prepared for a cliffhanger that makes the next book a must.”

“Although second son of a duke, Lord Hadley Fullerton has plenty to offer a bride. He’s madly in love with Evangeline Stuart, who gives herself to him body and soul. Just as they’re about to elope, she marries a man with wealth and title. Now widowed, she seeks an audience with Hadley, who wants nothing to do with her. He’s now betrothed to a woman who’s unaware of the prearranged marriage.  There is a villainess known only as De Palma who is out to murder all the Libertine Scholars. Her latest attempt fails, as she misses Hadley and wounds Evangeline instead. This brings out long-buried feelings he believes had died. Although she is willing to help in the search for the party attempting to harm the Scholars, Evangeline is withholding key information from Hadley. Will an affair mend their differences? (LOVESWEPT, dl $3.99)”

“Evans’s somewhat predictable fifth Disgraced Lords Regency romance (after A Whisper of Desire) reunites two lovers who were separated by misunderstandings and time. Lord Hadley Fullerton, second son of the Duke of Claymore, planned to marry Lady Evangeline, going against the wishes of her mother. Then he received a letter from Evangeline telling him that she intended to wed Viscount Stuart. Five years have passed since Hadley received that note, and Evangeline is now back in London after marrying the abusive viscount and being widowed. But Hadley will soon announce his engagement to Lady Claire Hampton and tells himself that he has no interest in Evangeline. After coming face-to-face with Evangeline, Hadley must decide whether she is telling the truth about not writing the note; meanwhile, he’s trying to unearth the identity of the culprit who has set out to harm him and his friends, the Libertine Scholars. The familiar plot is balanced by the constant undercurrent of attraction and mystery. Agent: Sarah Younger, Nancy Yost Literary. (Aug.) Bronwen Evans. Loveswept, $3.99 e-book (283p) ISBN 978-1-101-88317-4”