Excerpt: A Night of Forever 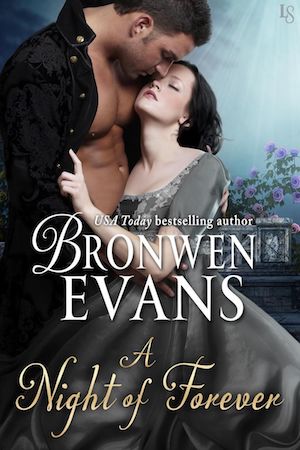 Welcome to the suspenseful and sensual world of the Disgraced Lords.

As the eldest Libertine Scholar, Christian Trent, the Earl of Markham, has been given the task of sharing the details about the spot of bother they are in.

Let me start by sharing how the Libertine Scholars came to be. We are six men who are closer than brothers. We met at school when we were very young, and when we went on to Oxford, we spent as much effort wooing the ladies as we did learning, earning ourselves the esteemed title of the Libertine Scholars. All of us had unhappy (putting it mildly) childhoods, and we soon watched each other’s backs, one for all, and all for one—you thought the Musketeers came up with that motto, didn’t you? Well, maybe they did, but we protected each other through very trying times.

You see, our fathers were all rotten to the core—they were world-class debauchers, drunkards, gamblers, and utter madmen. Each of the Libertine Scholars has spent the past ten years trying to restore his family’s reputation and make up for the evil his father perpetuated.

However, the sins of our fathers continue to follow us no matter how hard we try. Someone our fathers wronged is seeking revenge on the sons and is trying to destroy each and every one of us.

The villain is attempting to ruin us one by one, first destroying our reputations, and finally trying to kill each of us and the people we love. The race is on to uncover the identity of this evildoer before anyone gets hurt. Through each book we begin to discover clues to the villain’s identity and manage to thwart our enemy’s evil plans.

Arend’s story, A Night of Forever, runs in parallel with A Taste of Seduction, and starts at the end of A Whisper of Desire, where Her Grace Marisa, the wife of Maitland Spencer, the Duke of Lyttleton, was kidnapped by the villain, along with a woman called Lady Isobel Thompson. Unfortunately for Isobel, Arend Aubury, Baron Labourd, is sure Isobel was in the carriage with Marisa for a reason—an evil reason: as a spy for their villain. The truth? Well, you’ll have to read Arend and Isobel’s story . . .

Christian is a wounded war hero. He’s the gorgeous rake who is faced with accepting how his life has changed since being badly burned at Waterloo. As he struggles to rebuild his life he is falsely accused of rape and shanghaied to Canada.

Sebastian had to flee England for accidentally killing a man in a duel. On his return to London with a pardon from the Prince Regent, he is morally blackmailed into marrying the sister of the man he’s killed.

Framed for the disappearance of Lady Portia Flagstaff, Grayson rushes to save her from a harem.

Living with the legacy of a debauched father, and guilt that it was his father who caused this situation, Maitland has always held his passions on a tight reign . . . until Marisa enters his life.

Hadley is the villain’s deadly target . . . unless recently widowed Evangeline, the woman who promised him her heart five years earlier but then married another, shares her secrets. Only working together can they unmask the true identity of the villain.

Arend Aubury, the fifth Baron Labourd, saw the disintegrated carriage collapsed and lying on its side in the ditch up ahead, and prayed Marisa wasn’t in it.

Six horses lay a ways behind the carriage, screaming in agony, but their fate could wait until he found Marisa.

The enemy out to destroy Arend and his fellow Libertine Scholars might well have succeeded this time. Lady Marisa Spencer, Duchess of Lyttleton, had been kidnapped, and the carriage used to abduct her now lay splintered and spread along the road like matchwood.

He cast a fleeting glance at Maitland Spencer, Duke of Lyttleton, Marisa’s husband, whose horse thundered along beside him.

The waves of pain and horror radiating from his friend swamped him. Marisa was more than Maitland’s wife. She was his heart. His soul. His life. If anything had happened to her—

Their enemy would pay. And pay dearly.

Arend kicked his horse forward, desperate to get to the wreckage ahead of Maitland in case the sight was too horrific to allow his friend to see.

Even before the animal had come to a stop, Arend was out of the saddle and racing for the broken carriage door.

When he reached it and saw a woman inside, her chest rising and falling, the relief that she was still alive made him suddenly weak.

Moving quickly but carefully, he pushed aside the debris and eased into the wreckage until he was at her side. But when he rolled her gently over so he could lift her, the boiling blood racing through his veins turned to ice, his fists curled tight, and his need to avenge the hurt and pain that the Libertine Scholars’ enemy was inflicting on his friends burned like acid in his gut.

Arend had no idea who the stranger was, but prickles of unease slid through him.

The stranger had a nasty gash on her head, but she was breathing steadily.

She was about Marisa’s age, with Marisa’s dark hair, and a face that even a jaded man had to admit was a vision of perfection. Her perfectly shaped pouty lips, cute button nose, and long, thick eyelashes resting against her pale cheeks were the well-maintained features of a lady. For some unfathomable reason, he wanted to know the color of those eyes.

Besides, she was dressed in a ball gown.

But who was she, and why was she here? Was she an accomplice? All these thoughts jumbled in his head until the one thought that should have been uppermost in his mind howled at him to listen.

He heard someone approaching, and came to his senses.

A voice called out, “I cannot find the kidnappers or anyone else. It looks as though they scampered before the crash. Perhaps even left the carriage to teeter out of control. It does look deliberate.”

He searched frantically. Where the hell was she?

For a few heart-stopping seconds he imagined perhaps they’d been mistaken or misled. That Marisa had not been in the carriage at all. But then he saw a piece of her torn jacket on the floor.

He shot a look over his shoulder and realized the man who had come up behind him wasn’t Maitland but Lord Hadley Fullerton.

“Whoever she is, she’s alive,” he said. “Get her out while I look for Marisa. Her jacket’s here. Don’t tell Maitland yet. Keep him with you, in case.”

He didn’t need to spell it out.

Arend eased his way out of the wreckage, and then slithered down the damp grass into the ditch where the other half of the carriage lay in, partially in the muddy water.

His heart sank. No one could have survived that.

And that’s when he saw them. Marisa’s booted feet, barely visible under the mash of broken wood.

Arend froze, the horror of this moment shocking him to stillness.

Maitland loved this woman, and Arend was probably going to have to tell him she was dead. The sick feeling churning in his gut reminded him that for some, love was real, attainable, and everlasting. Maitland would never get over this loss. The Libertine Scholars had helped Arend through the worst, darkest days of his childhood. He was here for Maitland now, for all of them. He always would be.

He clambered out up to the top of the ditch, and, with a heavy heart, approached Maitland. He watched Maitland and Hadley laying the woman passenger on the grass. She was beginning to stir.

“Hadley.” He tried to keep his voice calm and steady. “I need help.”

Not calm or steady enough.

Maitland’s head jerked up. He was no fool. One look at Arend’s face and he sprinted for the ditch, flinging himself down the slick grass without a thought to his own safety. “Marisa. God. Marisa.”

Arend followed, but more slowly, giving the man room to process the tragedy. Wishing there was something he could do that didn’t involve standing over another dead friend, or beside a grieving one.

Then a cry from Maitland. “She’s alive.”

And, sure enough, Arend saw one little foot jerk.

He raced to help Maitland lift the wreckage off his injured wife and carry her to the shelter of the trees.

She might be alive, but she was badly injured. When he saw the large splinter of wood that protruded from her stomach, Arend suddenly found himself praying to a God who long ago had deserted him.

As they laid her gently on the grass it was obvious that only a surgeon could remove the wood.

And he ran for his horse, responsibility for Marisa’s life and Maitland’s happiness heavy on his shoulders.

He had to get help, and fast. The best chance was the army base not far away, near Merville.

Ignoring the stirrup, Arend vaulted into the saddle, turned his horse to the northeast, urged him into a gallop, and then gave him his head.

This disaster was not supposed to happen. Not to Maitland. Or Lord Hadley Fullerton. Or Sebastian Hawkestone, Lord Coldhurst; Christian Trent, Earl of Markham; or Grayson Devlin, Viscount Blackwood. They didn’t deserve the tragedies they’d suffered. Unlike him, his friends were honorable.

Honor. Arend blinked water from eyes narrowed against the wind as his horse ate up the ground. He wasn’t sure he remembered what the word meant.

They thought he was like them. He wasn’t. Seven years ago he’d forsaken all honor. He’d do anything to atone for that period in his life, anything to once again merit these men’s admiration and friendship.

Disasters happened to him. They should. He deserved them.

He found the barracks and rode straight to the regiment’s commanding officer.

Using Maitland’s name and title without scruple, Arend commandeered a fresh riding horse, eight mounted soldiers, two horses harnessed to a cart, and, most important of all, a surgeon, and was on his way back within the hour.

But would it be fast enough?

« Return to A Night of Forever