Excerpt: A Love To Remember 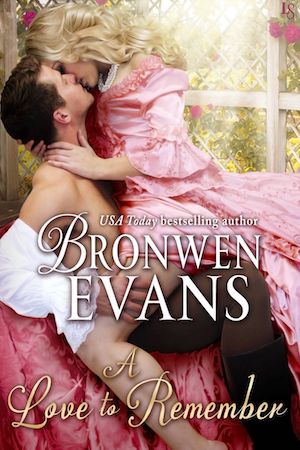 Dimly, in the distance, Philip heard Rose scream, felt her body arch up beneath him, her nails sink into his arms. Then, over everything else, the powerful contractions of her sheath told of her unraveling. She tumbled from the peak in the same moment as he leaped toward it in triumph, a roar ripping from him as he pulled free of her body and let his release shudder through him.

They clung to each other as his spilt seed soaked the sheets. The tumultuous sensations caught Philip, tossing and hurling him like a ship lost on a stormy sea, like a man drowning in pleasure.

Rose’s heart thundered under his ear. Her skin slick with heat and him. She was his perfect, beautiful Rose, and he would never feel like this with any other woman. If he’d been a praying man, he would have prayed that their world would remain as it was. That society would leave them alone. That no one would hurt her again—least of all him.

“Am I crushing you?”

Rose’s answer was simply to wrap her arms around him and hold him even closer. Even tighter.

“I love the weight of you—the feel of you atop me.” She stretched and yawned. “There is nothing more perfect.”

He relaxed on her but moved his body so she didn’t bear his full weight. He’d rest, for just a while, because he wasn’t leaving this bed before they did that again. Soon his eyelids drifted closed. Heavy. So heavy.

“Sleep,” she whispered. “I shall wake you later—and this time I shall enjoy doing all the work.”

He would dream of all the inventive things she could do to wake him up. She was wickedly skilled with her mouth—and not only in conversation.

He fell asleep with a smile on his face.

Rose watched Philip as exhaustion overcame him. She would let him sleep for a few hours before taking enormous pleasure in waking him.

She moved and felt the damp patch where he’d spilled his seed. Tonight he’d made love to her as if she were the only woman in the world. She’d hoped that maybe—just maybe this time—he might have declared his feelings by spilling his seed deep inside her.

Stop being a coward and ask him. Tell him that you have changed your mind. You want to marry him. You want more children.

But something stopped her. Philip was the type of man who would see what he wanted and hunt it down. If he really wanted her as his wife he would ask her—no, he’d demand it of her.

She feared to confront him, to speak her heart. Because the truth was that if this half-life was all he could give her, she was afraid that she’d accept it and settle for fleeting moments of pleasure, when really she wanted so much more.

So she said nothing, just lay in the dimming firelight stroking his hair and watching as the man she wanted above all others slept.

« Return to A Love To Remember