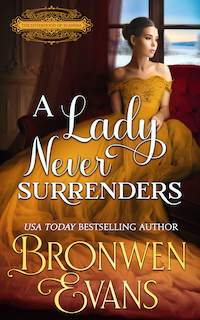 Every woman in Lady Rutherford’s ballroom envied her. The armor piercing stares were wholly undeserved and Miss Tiffany Deveraux took no joy in the attention.

She stood between two of the most sought after bachelors in all of England. Her guardian and cousin, Fane Deveraux, the Earl of Marlowe flanked her left side, while Marlowe’s rakish best friend, Slade Ware, Marquess of Wolfarth stood at her right elbow.

What the envious debutantes did not understand was that she was all but invisible to both men. Marlowe’s mother always insisted on Fane escort her and his sister, Lady Claire Deveraux, to every ball, and where Fane went, Wolf, followed.

Since Lady Marlowe was no longer living, that thought still cut deep, Tiffany felt the loss, it had been like losing a second mother. It also meant the men would soon deposit them with Lady Vale, a society matriarch, before heading to the sanctuary within the card room. Tiffany could almost smell the men’s fear. Mother’s with marriageable daughters were closing in. Like a well-planned military advance, every mother present was working to find a way to introduce their daughters to the men.

Tiffany pushed her glasses back up her nose feeling more and more invisible as the two men talked over her head, while Claire, who was standing behind them, was busy filling her dance card. Her cousin was popular with men looking for a wealthy and pretty young lady of quality to marry, and also with the young ladies who were eager to become friends in order to meet her brother.

Tiffany was not bitter or jealous of her cousin. She herself was neither wealthy nor pretty; it was a fact that could not be disputed. What she did have, thank the lord, was intelligence. She did not need to marry, or marry well. Her gift with numbers saw to that. Soon she would not even need Fane’s charity. She hugged her smug secret to herself, armor against those who looked down their noses at the penniless orphan.

“I suggest we see the girls safely to Lady Vale’s side before Lady Rutherford has us roped in as dance partners.”

Wolf’s words flew over her head as she barely came to his shoulder. “Are you listening, Fane?” he persisted in that husky, innately sensual voice that always shook her feminine sensibilities.

“You go along. I think I see Lady Saline Porter,” her cousin replied.

She turned in the direction the men were now staring and noted the beautiful young widow with a flock of gentlemen surrounding her. She was certainly not invisible.

“I thought your actress was enough woman for you,” Wolf said before the two men guiltily realized Tiffany was in earshot.

Fane cleared his throat and smiled down at her. “Isn’t that Miss Valora standing with her mother? Look she’s waving at you.”

Yes, Valora was standing next to her mother Lady Vale. “I’m waiting for Claire,” she replied. Just then Claire swung toward her.

“Tiffany, Lord Donahue was just saying that he’d love to beg a dance from you if you have any free?”

The young man’s face was a mottled red as he stammered over her hand. “Miss Deveraux, ma-mayy I have the pleasure of the fff-first waltz of the evening.”

She inwardly sighed. Lord Donahue was a nice but dim, and very pimply young man, who had taken a shine to her. Most likely because she’d been kind to him one night at the beginning of the season, and he’d sought out her company ever since.

She could feel Wolf and Fane’s amusement without needing to look at them. “That would be lovely, thank you, my lord,” and she held out her card for him to complete.

Once Lord Donahue had taken his leave, Fane shook his head. “Why do you encourage the man, Tif? You can do so much better than him.”

Claire slipped her arm through Tiffany’s and squeezed her hand.

Anger made her bite when really she should have ignored him, but it didn’t help that Wolf was there as well. “Not all of us are blessed with looks or money, Fane. You have no idea what it is like to go unnoticed. Most of us mere mortals make the most of what God has given us. Lord Donahue is a very nice man.” She could not look at the two handsome men beside her. They had never, ever, had a moment’s doubt of how the world perceived them. Handsome and desirable were their middle names.

She made to set out across the room to greet their friend Valora, but before she’d taken a step Wolf bent to whisper in her ear, “I think when God made you he knew exactly what he was doing.”

What was that supposed to mean? Was that a compliment? Her heart hiccupped and she couldn’t stop her head turning sideways only to find herself pinned by Wolf’s crystal blue eyes. They weren’t, as she’d thought, mocking her, instead they were filled with something much worse, pity. She wished the floor would crack open and swallow her whole. Without another glance she tugged on Claire’s arm and escaped around the edge of the ballroom before tears welled.

She knew Wolf was trying to be kind, but she’d been infatuated with him since that day seven years ago when he’d carried her into her new home. But Wolf was not for the likes of her. Love did not easily find women like her. She didn’t inspire poets to write sonnets, or artists to paint her portrait. Her heart clenched tight in her chest. Love—oh, how she wished for a man to find her worthy of love. That was only partly true. She wanted one man to love her—Wolf. But she was far too intelligent and realized that was but a dream. Wolf could have his pick of any woman he wanted and…and he was not for her. Would never be for her.

“I could thump my brother. In fact, I should do so every morning until he learns to think before he speaks.”

She gave Claire a weak smile. “It’s not his fault. The world has always been easy for him. He has no understanding of what it is like for those not so blessed.”

Claire shook her head as she waved out to Valora. “No. That’s not it. He is shallow. He does not look deep enough. He is distracted by the beauty of a woman rather than what is in her heart, or in her soul. I’m hoping he grows out of it before he finds himself shackled to a woman who, when her beauty fades as we know it will, is empty and boring. Married for the rest of your life is a long time.”

She thought of the way the two men had drunk in Lady Saline.

“We are shallow too. You’re assuming a beauty like Lady Saline does not have a heart, yet I know she does.”

Growing up as an only child, books were and still are, her best friend. Tiffany read widely and because of that was worldlier then many of her age, and because she was one of those people who observed rather than partook in life, she had seen the way Lady Saline and her companion, Miss Murphy, interacted. The lingering of fingers as their hands brushed, the little smiles that only lovers understood, and the fact not one of the handsome gentlemen surrounding her, not even her cousin Fane, drew her complete attention away from Miss Murphy.

She humped at the absurdity of life. “They think because we are younger, and female, that we don’t think at all. When in reality we see far more than they do.”

“What do we see?” Valora asked as they arrived at her side.

Tiffany pressed kisses to her cheeks. Valora would not understand, as she was beautiful beyond words. “Oh, nothing. It’s just Fane annoyed me.”

Valora peered round her to stare at the men before they disappeared into the card room for the rest of the evening. “Well, something has upset them. Wolf is remonstrating with Fane rather vigorously.” Tiffany glanced over her shoulder. The two men did seem to be arguing.

Valora soon lost interest and sighed. “I find most men are fairly annoying especially when they insist on proposing when they are well aware I shall not accept.”

“You are getting quite the reputation for saying no,” Claire stated. “If you’re not careful you’ll wake up one day and every man will be too scared to ask.”

“You can talk.” Valora sniffed. “Then he is not the right man for me.”

Tiffany privately thought that perhaps there was not a man who would ever be right for Valora. She’d turned down handsome rogues, attractive dukes, and wealthy lords. She glanced at Lady Saline and wondered if her good friend was that way inclined. She hoped not, as Valora’s brother Lord Vale, was determined to see her wed this year.

“Oh, I say,” Valora, exclaimed as she tapped Claire’s gloved arm with her fan. “Your brother and Wolf are dicing with danger. They’re coming this way and Fane looks most put out.”

The soft hum of female mutterings and fan twitching rose to the level of a swarm of bees by the hive. The men were not seeking the safety of the card room this evening. What were they about? Women were jumping to conclusions—dangerous conclusions. Tiffany hoped they were mistaken conclusions. Wolf could not possibly be announcing to the ton that he was looking for a wife. She knew Fane wasn’t.

Lady Rutherford saw her chance and began to gather her two daughters and shoo them in their direction.

Wolf continued to stride purposely toward them, while Fane looked as if he’d like to shove a dagger in his friend’s back.

“The Wolf looks as if he’s hunting.” Claire said exactly what they were all thinking.

Tiffany thought Claire’s description very apt. Wolf’s lips were curved up in a sly smile. You could imagine a snarl taking its place at any moment. His black hair, cut short to shape his face, gleamed blue-black in the candlelight and his broad shoulders cast black shadows on the walls as he strode the length of the room. When he drew nearer, the sharp contours of his face, the aquiline nose and chiseled cheeks saw many take a step back. Wolf did look like he was hunting. His gaze was hard and focused—her heart began to pound in her chest—focused completely on her.

Her legs were suddenly made of jelly.

He stopped directly in front of her taking her gloved hand and bending low over it, his lips brushing the material, making her knees knock.

“Miss Deveraux, I would be honored if you would allow me the next dance.”

Her eyes narrowed. What was he about? She curtsied and finally got out some words. “How lovely to see you wish to dance this evening, my lord.”

His smile widened and she almost forgot to breath.

« Return to A Lady Never Surrenders