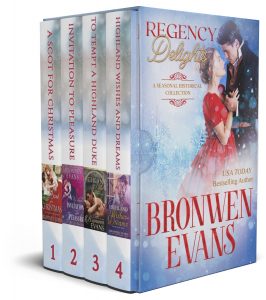 To Tempt A Highland DukeWidowed Lady Flora Grafton must be dreaming…Dougray Firth, the Duke of Monreith, the man who once pledged her his heart and then stood by and allowed her to marry another, has just proposed. While her head screams yes, her heart is more guarded. Why, after eight years, this sudden interest? When she learns the truth… can she trust Dougray to love her enough this time?

Highland Wishes And Dreams
Finn Wilson, Viscount Stuart, is in an untenable position. He must ask for the return of a family heirloom from his brother-in-law. An emerald ring that belonged to his now dead sister. He seeks Lady Galina MacDonald’s help when her brother refuses to give the ring back, but she’s hiding something.