A Scot For Christmas - Novella 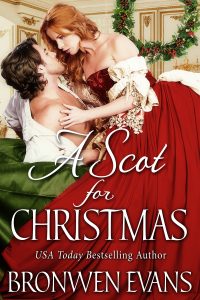 A friends to lovers Christmas Romance. Previously available in the Christmas in Kilts Anthology.

Lady Emma Duckworth has despaired of ever receiving an offer of marriage. The daughter of an Earl, with a large dowry should have no difficulty finding a husband. Nicknamed ‘Giraffeworth’, apparently towering over men is not conducive to matrimony. She’s therefore decided to embrace her life and future as a spinster, but has one wish to fulfil before she locks herself away. She has to convince the man who owns her heart, a man who barely acknowledges she’s alive, to give her one night of passion.

Since he lost his wife, Dougray McGregor, Earl of Lorne has shut himself away. He’ll never risk his heart again, and is happy to abide by his late father’s wishes and marry his neighbor’s daughter to save their family from the poorhouse. But fate has other ideas when his best friend’s spinster sister arrives at his door. Lady Emma is all grown up, and for the first time since his wife’s death his passions are stirred. It would be so easy to give into her request. But when Emma stirs more than his lust, can he protect his battered heart and fulfil his vow to his father.

» Excerpt: A Scot For Christmas